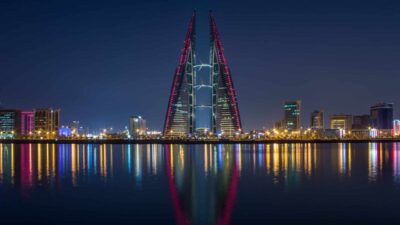 The Kingdom of Bahrain is a tiny island state located in the Persian Gulf, off the Saudi Arabian coast. It consists of over 80 natural and artificial islands. Its population of just over 1.5 million people makes it the third least-populated country in the Asian continent.

Bahrain operates a mixed economic system with the government involved in certain industries and responsible for providing some services.

Bahrain successfully established the first post-oil dependence economy and is the fastest-growing economy in the Arab world. However, oil is still the most exported product and its sale accounts for a chunk of government revenue.

It has a consistently rising GDP-per-capita rate which is one of the highest in the region. It is also classified as a high-income country with a very high HDI score. Due to diversification efforts, the country has a booming tourism industry with an emphasis on Islamic tradition and Bahraini heritage.

Ease of doing business in Bahrain

According to a Wall Street Journal publication in 2011, the Bahraini economy is the freest in the Middle East and one of the top freest in the world. It also has favorable corruption and ease of doing business ratings. The Bahraini government encourages foreign direct investment by allowing total foreign ownership of industrial firms.

It also has an efficient judicial system, with the Civil High Court which adjudicates labor disputes having an average case length time of 3 – 6 months.

Labor terms and conditions are prescribed by statutory law: the Bahraini Labour Law of 2012. The law requires employment contracts to be written in Arabic.

The average working hours are 8 hours each day and 48 hours a week. A daily working limit is set at 10 hours.

Overtime compensation in Bahrain is fixed at 25% above the normal hourly rate.

It should also be noted that working hours are to be broken up into not more than 5 hour-periods because breaks are expected to be taken at least, every 6 hours.

During special periods like the Ramadan exercise, the cap is reduced to 6 hours a day and 36 hours a week.

While the country doesn’t have a minimum wage, the average monthly salary in Bahrain is within the range of $1000 and $2,400. It should be noted that just about 50% of the population are Bahraini nationals. Therefore, the country has a large supply of foreigners, majorly from other Asian countries, seeking employment.

Why consider Bahrain as your next outpost?

Bahrain’s geographical location and tourism-focused policies mean that it would see its already wealthy population greatly increase. Its wealthy population is already an opportunity for businesses, which is why most of the biggest financial institutions have already joined the market.

However, the main attractions are the favorable policies implemented by the business-friendly government. As the country tries to further diversify its oil economy, the government has put in place several policies to create an enabling environment.

The most notable of which is the no-tax policy. The government doesn’t collect corporate or income tax from both citizens or foreigners. The only businesses that are taxed are those engaged in oil production services.

How can WeHireGlobally help you expand into Bahrain?

If Bahrain is the next marketplace for your business, then WeHireGlobally is an important partner for you. WeHG is an international professional employment organisation (PEO), that helps companies of different sizes to expand globally with no legal risk and 100% compliance. With our established presence in Bahrain, we provide you with the best employer of record solution to hire and retain talents without setting up a physical entity in Bahrain. We add your employees to the local payroll and ensure the proper management of all their payroll tax obligations and compliance while you focus on other administrative and operational responsibilities. With WeHireGlobally, you are mitigated from all risks associated with international expansion to Bahrain as our solution provides you with 100% compliance with all financial and labor laws.